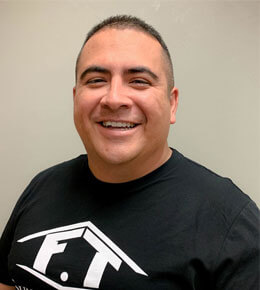 Chris attended Angelo State University where he completed his Bachelor of Science degree in 2004, then went on to earn his Master of Physical Therapy degree in 2006. Like many therapists, Chris was introduced to the field of physical therapy following an injury to his hand playing high school football. He has worked in just about all settings of physical therapy and worked across the country, giving him vast experiences to approach every therapy condition with perspective influenced by the many therapists he has worked with over the years. There isn’t much that he hasn’t seen by now.

Chris started Foundation Therapy with the goal in mind of making therapy more accessible to the residents of Wise County and beyond. He loves working with nearly all kinds of conditions. He says, “I will work with anyone who is willing to put in the effort. I also love working with the patients where there is no ‘protocol’ for how rehab should go.”

Chris loves working at Foundation Therapy, but says he loves going home even more. He has been married to his college sweetheart, Kristi, since March of 2007. Together they have enjoyed traveling all over the US while working with Chris’ endeavors. They are happy to be settled back in Chris’ hometown of Bridgeport and have two little girls who are sure to keep him on his toes. Outside of work, he enjoys going to the deer lease with his dad, grandfather and uncles. He also enjoys riding motorcycles, fishing, golfing, or just getting outside. His family and extended family is always his first choice of people to be around. One of Chris’ greatest honors is serving with his local church and getting to be part of a bigger mission than he could ever do alone.